You are here: Home / Blog / A Common Divorce Mistake: The Judge Will Be on My Side

Parents often believe that they will be able to tell the judge what a horrible person the other parent is and that the judge will be on their side and rule in their favor.

They believe will get full custody of the children after their story is told and the judge will relegate the other parent to a few hours of visitation a week. This type of thinking a common divorce mistake and is not a true picture of what really happens in court when a judge is tasked with making custody and parenting decisions for parents who cannot get along. In reality, judges do not want to hear parents speaking negatively of each other, do not want parents airing dirty laundry in a public courtroom, do not want one parent trying to pain the other parent as incapable or ignorant or dangerous to the children. Judges know that no one is a perfect parent or a perfect human being.

These parents who argue and battle and put their children in the middle just put the judge into a “he said/she said” cycle, which only hinders the judge in making a decision that will be best for the children involved.

These parents need to remember the judge’s goal is not to decide what is best for the parents, but to decide what is best for the children. The judge expects the parents to act like adults and manage their emotions and not fight over their children. California’s public policy is that after a divorce, the children should still have frequent and continuing contact with both parents. For one parent to walk into court saying the other parent is horrible and should only see the children a few hours one day a week will just backfire.

Judges also know that exposing children to conflict has a negative impact on the children, especially when the two parents are denigrating each other. Many of my mental health professional colleagues like to remind parents that the child sees themselves as half of each of parent. Thus, if one parent calls the other parent names, or rolls their eyes and sigh when the other parent calls, or are just being generally dismissive of that other parent, the child will internalize those things.

The child may think, “Mommy doesn’t like daddy. I’m half daddy.  So, mommy must not like me either.” This is why it is important for divorced parents to manage their emotions and protect their children from conflict. Divorced parents should seek out a professional counselor or meet with a friend or relative, but not use the child to vent about how angry or unhappy they are with that other parent.

Because of the impact of divorce upon children, it is a good idea to look for an alternative process instead of immediately running to court thinking that the judge will be ‘on my side.’

When you choose a no court option, such as Collaborative Divorce, you can work you’re your team of professionals who will take the time to learn about your family dynamics, understand your concerns and goals, brainstorm to find compromises, and craft a unique solution for your family and achieve a better outcome.

Jami, thank you for guiding us through this process so compassionately. As painful and sad as this has been, I am grateful we were able to guide ourselves with your assistance. You are a skilled listener. 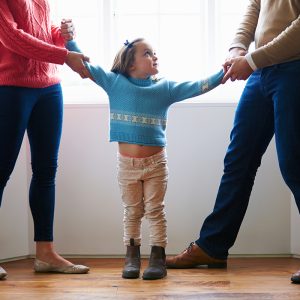 What is Co-Parenting and Why Does It Matter in My Divorce?

When you end your relationship with the other parent it does not end the importance of raising your children as Co-Parents.  A child is not a … END_OF_DOCUMENT_TOKEN_TO_BE_REPLACED