You are here: Home / Blog / Is Netflix’s “Marriage Story” an accurate portrayal of divorce in Los Angeles?

Netflix’s “Marriage Story” film has recently been released on DVD

Those who do not have a Netflix account now have the opportunity to see a realistic portrayal of how a couple deciding to divorce gets sucked into litigation and fighting when that is not what they want to do, especially because they have a young son. Unfortunately, that is the nature of a litigated divorce – it is like a runaway train and once you get on it, it is hard to get off.

Litigation is an adversarial process and it polarizes the couple into a ‘win-lose’ mindset.

The words or behavior that you exhibited previously, that seemed reasonable or innocent at the time, may come back to haunt you in court, as the attorneys will try to portray each other’s client in a bad light. Your words get twisted and taken out of context and the attorneys will take seemingly normal everyday events in a marriage and try to use them to make you like an unfit parent in front of the judge. For example, there is a courtroom scene where the two attorneys start throwing barbs at each other, impugning each other’s client, such as “Your client was stumbling around and admitted to drinking too much wine – do we want to go there?” and “Remember, your client agreed to share that bonus payment – and now you want to claim it is separate property?”

And in that courtroom scene, the judge hears the arguing lawyers and says: “I’m new to this department and I’m not familiar with the case. Your clients have financial resources, so I am going to appoint a child custody evaluator.” For that couple, the judge has just brought a stranger into this family’s world – a stranger who has the power to advise the judge on which parent should have more of less custody of their son.

Some people may think it is unrealistic when the film shows a scene of the wife’s attorney attending a party at her client’s house, however, this is not unrealistic at all. Many clients are grateful and thankful when the litigated divorce process finally comes to an end because it has been such a horrible journey – and the only person that has been on that journey with them, besides their ex-spouse, is their attorney. Although you may share with your family or close friends some of the aspects of your divorce case, those people are not experiencing the ordeal with you, in real time, only your attorney is on that journey with you – step by step – and understands your experience.

The Apparent Cost of the Divorce Was Not Realistic

There is a quick moment in the film when the husband writes a check to his lawyer, for $25,000.00, but that would not nearly cover the cost of the divorce for the husband – especially since he used multiple attorneys – one whose rate is $950/hour! Husband and wife would each probably have spent $100,000 or paying their attorneys to litigate their divorce case and paying for the child custody evaluator.

The film ends showing the couple over a year later at Halloween. The previous year at Halloween, in the midst of the divorce, the couple put their son in the middle of a tug-of-war regarding his costume and trick-or treat time. One positive note at the end of the film is that this time, at Halloween, the couple is communicating and cooperating and not worrying about who has custody of their son when and whose night it is. The mother tells the father: “We were going to go out for dinner, but [the son is] just pooped. Why don’t you take him?” The father is surprised and says “Are you sure? It’s your night” and the mother replies “Yeah, but who cares? Take him. He’s tired.” The family has come full circle – from “whose night is it with our son” to “Let’s just do what works best for our son,” so the film does have a sort of happy ending.

Do You recommend Clients to Watch It?

I have recommended it to several couples already and explained to them, “There are parts of the film that may be helpful, because you’re struggling with something similar.”

Thank you for all your support and hard work in this process. 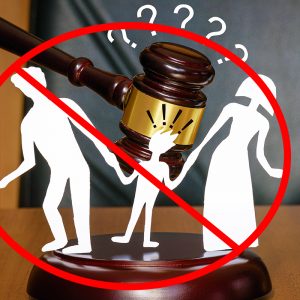 4 Good Reasons to Keep Your Divorce Out of Court